Most people think of USS Langley as America’s first aircraft carrier — CV 1.  While that’s true, and being the first flattop in the fleet is an honorable distinction, Langley began life as a collier — USS Jupiter, which itself was a relatively new concept of delivering fuel to the afloat forces where they need it.

Today, the U.S. Navy has oilers and stores ships that can refuel and replenish ships while they are at sea, and a sophisticated logistics system that can procure gas and groceries wherever the ships call.  But that wasn’t the case in the early 20th century.  The sailing ships didn’t need fuel, but the coal-fired steam-powered ships did, and it wasn’t available everywhere.  Having ships dedicated to carrying coal to supply the fleet was revolutionary.

Colliers appeared during the Civil War when coal fired ships became common, and continued through World War I. While some served later, they were used more for their cargo-carrying capacity after World War I. Most were converted from merchant service, but Jupiter and her sisters were purpose built by the Navy.

USS Jupiter wasn’t the first collier.  She was originally known as Fuel Ship No. 3, or Fleet Collier No. 3, and eventually AC 3.  She was part of a class of four Proteus-class colliers built for the U.S. Navy, but was singled out for a new kind of electric drive.  USS Jupiter and USS Cyclops were actually slightly larger than USS Proteus and USS Nereus, and there were differences in propulsion systems and coal handling equipment.
Her keel was laid down at Mare Island Naval Shipyard in Vallejo, California in 1911.  She was launched   on Aug. 14, 1912, and commissioned on 7 April  7, 1913. She was unique in her propulsion system.  Her three boilers powered two shafts through a General Electric turbo-electric transmission to give her a top speed of about 15 knots, and a range of about 3,500 nautical miles at a cruising speed of 12 knots.

Airplanes were showing great promise to provide scouting ahead of the battle force.  The Royal Navy was building carriers, and the U.S. wanted into the game.  Congress showed some reluctance.  But they allowed for a conversion to evaluate and demonstrate airplanes flying off of ships.
As coal gave way to oil as the fuel of choice for the Navy, there were still a lot of coal fired ships, and still a mission for colliers.  But the trend to oil was making colliers obsolete. Jupiter was a good candidate for conversion because she had a lot of internal space for stowing aircraft.  She was renamed Langley — for Samuel Langley, a pioneer in naval aviation--and underwent a conversion that involved the installation of a flight deck — earning her the nickname of the “Covered Wagon,” and a reconfiguration of her stack arrangement.

Her conversion to an aircraft carrier was basically an experiment.  Langley was never going to be fast enough to keep up with the fleet. The Washington Treaty came about in 1922, and led to the two battle cruisers that were redesigned and built as aircraft carriers, USS Lexington and Saratoga, were real combatants.

Another collier was planned for a conversion; however, it became clear that the larger, faster ships would be more useful.  But Langley showed it could be done.

Langley had an elevator to take aircraft from the hangar deck to the flight deck, and arresting gear, albeit primitive.  During her career, Langley was used to test catapult launching and night landings, blind landings and cold-weather operations.

Langley was exempt from the treaty limitations because she was already in existence, and was really an experimental ship.  By the time World War II arrived, U.S. aircraft carrier tonnage was limited by law — the Vinson-Trammell Act of 1924 — and so she was converted again. This time to a seaplane tender, with half of her flight deck removed.  Langley completed her conversion on February 26, 1937, and was assigned hull number AV-3 soon after.

But she did serve during World War II.  As a seaplane tender, she was frequently used to ferry aircraft.  She was serving in this role as part of the American-British-Dutch-Australian Command (ABDACOM) on February 27, 1942, carrying 38 Army Air Force Curtis P-40 Warhawk fighters to Tjilatjap in Indonesia, when she was attacked by 16 Japanese bombers.  She was severely damaged and had to be scuttled by gunfire and torpedoes from her escorts. Destroyers USS Whipple and USS Edsall picked up survivors, then subsequently transferred those survivors to oiler USS Pecos. Pecos, herself, was lost when the oiler was attacked by Japanese aircraft as the oiler made her way to Australia.

Although she didn’t have wartime service as a carrier, she did train the first generations of carrier pilots and informed the Navy of what was possible, and would soon become a mainstay of the U.S. fleet. 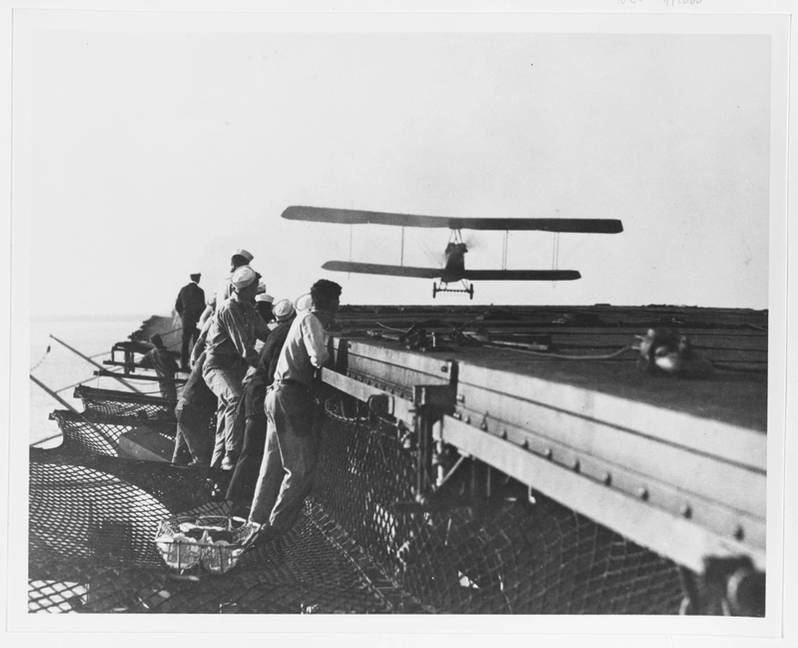 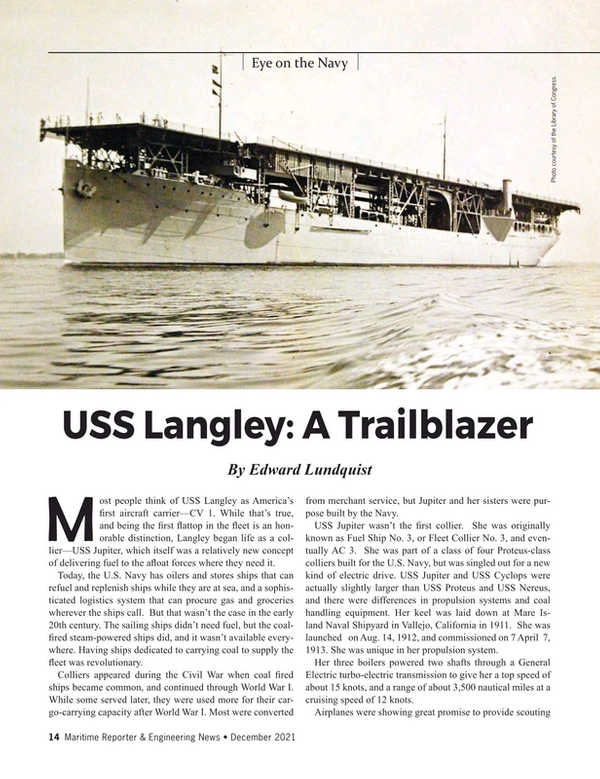 Other stories from December 2021 issue